The latest version of DataFlex Reports 2018 - version 6.2 - is now available for download in both the Developer and Standard editions!

With version 6.2’s extensive list of major enhancements, users of alternative reporting solutions have more reasons than ever to make the change to DataFlex Reports. And, no alternative offers DataFlex Reports’ easy report integration with applications!

The biggest new feature and major improvement delivered in v6.2 is the introduction of crosstabs (also known as pivot tables). Crosstabs allow displaying data in a table where summaries are automatically calculated.

With crosstabs you can make a report showing summaries over grouped data per category, such as the amount of sales per shipping method, per payment condition, as shown here:

DataFlex Reports gives you full control over how the lines, margins, etc. in the crosstab are displayed.

Another example could be reporting on sales volume per sales person, per year and USA state: 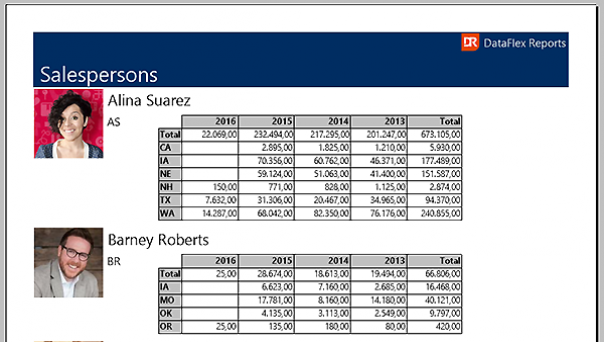 The DataFlex Reports Studio is now able to run as a side-by-side assembly. This means it no longer relies on any registered components to operate (also known as "regfree"), eliminating the risk of conflicts or missing shared components (such as CodeJock).

A number of new built-in formatting functions have been added. These functions allow you to convert data - such as date, time, number, currency and integer - using a mask or the Windows default setting.

A number of conversion functions have also been added which allow you to specify sizes and positions – in inches, centimeters or points – independent of the Windows locale settings of the machine on which the report runs. This enables changing the layout of the report on the fly.

The following screenshots were taken from a sample report showing a customer list where parameters are used to show or hide a phone number or fax number, and if not shown, to move the e-mail column over:

Or to hide both phone and fax number, and move the e-mail column to the left: 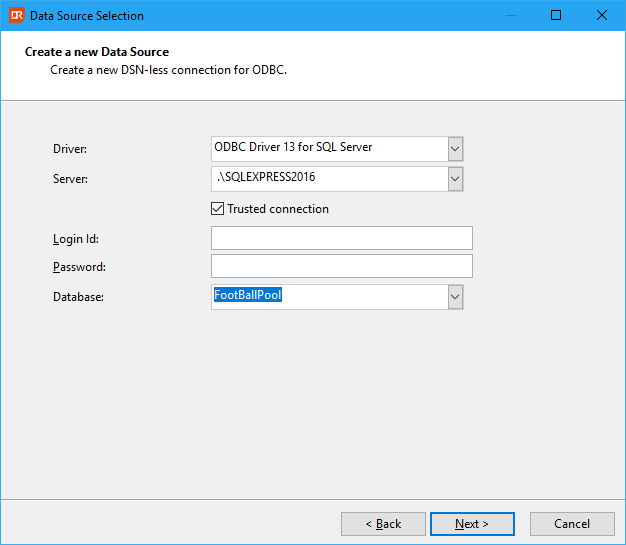 A new option ‘Export data using native Excel datatypes’ has been added to the Excel export. When using this option all data types are converted to unformatted native Excel data types. This makes it easier to make changes to the exported data in Excel.

A new option ‘Show data-source connection errors’ is now available. With this option all errors which occur when you connect to a data-source are reported which can help you determine why you cannot connect to a particular data-source.

Barcode support has been improved with:

1. A new option to set the default barcode type:

2. An option to display the humanly readable text which appear underneath some barcode types. The following screenshot shows the normal behavior of the “code 3 of 9” barcode:

The next screenshot shows the option to hide the text underneath the barcode:

The last screenshot shows the use:

3. Parameter fields can be used to display a barcode.

SQLite is a widely used zero-configuration SQL database. It is used by DataFlex Reports for its internal data storage. The new SQLite driver included in DataFlex Reports is a native driver and does not rely on an installed ODBC driver or any other dependencies. Just like the ODBC driver, the SQLite driver allows you to base your reports on a SQL statement and supports the SQL() function.

With this addition it is possible to create reports on any SQLite database (such as the Chinook sample database).

A number of other features and enhancements are delivered with DataFlex Reports 2018, as well as bugfixes on reported issues.

View the ReadMe (Developer edition and Standard edition) for complete details about the bugfixes and other enhancements that are included in this release.

Read about: DF Reports 2019/v7 - How to improve your productivity
Read about: DataFlex Reports v6 Highlights